If you've come here by way of my High-voltage projects sub-menu , you will have seen my warnings on electrical safety. If you haven't read this yet, please click on that link and do so before proceeding.

The inspiration for the Van de Graaff machine which my Dad and I attempted in the late 1960's came directly form "Model Making for Young Physicists" by A.D.Bulman. We followed his instructions almost to the letter.

Here is a picture of Bulman's model. 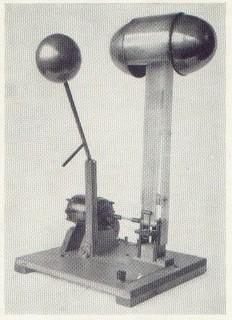 (Thanks to John Murray , the publisher of the book, for permission to include this photograph and the following diagrams.)

We obtained two aluminium pudding-basins and a piece of sheet aluminium. I spent some time bashing away with a bag of sand inside the bowls, to get the flat bottoms as round as possible.

My Dad obtained some "metallic glue" which we thought would be conductive. He carefully bent the aluminium sheet into a curve and used this glue to attach the bowls to the ends of the resulting partial-cylindrical surface to make the dome, according to Bulman's instructions as indicated here: 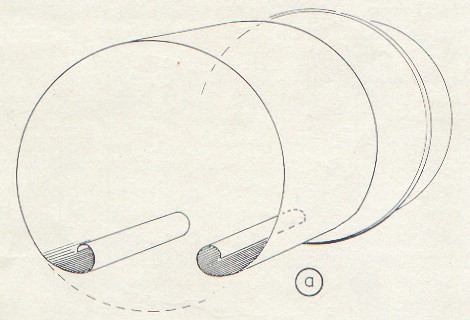 This diagram shows Bulman's overall scheme for the machine. (Click on it to see a bigger version.)

A is the dome. B and C are the uprights, fixed to a rigid base box D made from a substance called "Paxolin". (Bulman says that his uprights were made from something called "Alkathene", but that thin perspex should work almost as well. We used perspex in our model). E is the lower "drive" pulley or roller; F is the belt; M is an electric motor; R is a rheostat for controlling the motor's speed; G is a piece of rubber pressure tubing to connect the motor to the drive pulley (we used plastic tubing); and N is a wooden ball with aluminium foil stuck on to it, mounted on an earthed metal tube.

The next diagram shows how the dome was to be held securely on top of the column. Bulman says to use a thick layer of the same conductive glue (Al. 'solder', as he calls it) to stick two bolts (with most of their threads turned off) to the inside top of the dome. These bolts hold the upper comb, and support the dome steady on the column. 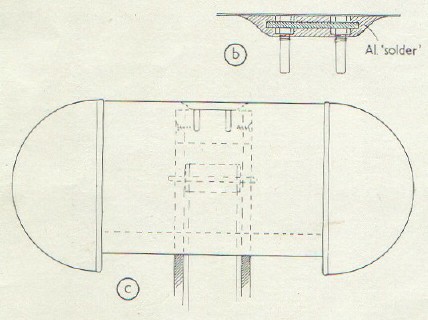 This final diagram (click on it to see a bigger version) shows the detail of the various components. Note the use of extra rollers to reduce the gap between the two sides of the belt, thus promoting the inductive effect.

Bulman used old 78 rpm gramophone needles in his combs. These were set into holes drilled in metal tubes. He says that the sharpened edge of a metal strip should work equally well. We used pieces cut from the aluminium sheet which we'd used to form the middle section of the dome (or "prime conductor", as he calls it in this diagram).

Okay! Well, that's Alan Bulman's Van de Graaf machine. My Dad and I made something rather similar. Don't laugh! Here it is - or what's left of it: 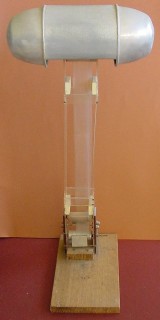 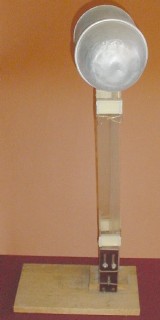 (You can click on these pictures to see bigger versions.)

Before going into details of our machine, a few background remarks:

I dug this old thing out in 2003 or 2004 (not sure). I was saddened to see that more than a third of a century had taken its toll. The dome, originally quite bright and shiny, had "furred up" - a crusty layer of (presumably) oxide had formed all over it, so that it was dull and rough to the touch. No use as an electrostatic surface at all!

It had never used to work very well. We certainly never got anything that could be called a "spark" out of it; the best we could manage - just once or twice - was a glimmer in the handle of my Dads's power-point-testing screwdriver. No way was it going to do even that, now!

We never did make a version of the earthed ball. (If the machine itself had given us a bit more encouragement, we probably would have done.)

Overall, a disappointment. Note: I'm not blaming Alan Bulman at all; I'm sure his machine worked very well. Some combination of factors in our construction must have caused the problems.

Probably the main cause of the trouble was the belt. Bulman suggested using plastic curtain material. (I imagine he means the type of thing used in showers, which notoriously acquires a static charge very easily.) We used a large loop of polythene, probably cut from a large plastic bag. 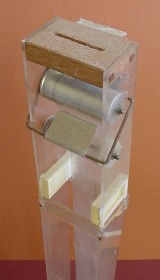 As mentioned earlier, we used pieces of the same aluminium plate which formed the central part of the dome, sharpened with a file, for the combs. In all honesty, this is probably far from ideal.

Instead of the two bolts inside the dome, my Dad glued (with that same "metallic" glue) a piece of that same aluminium plate, so that it would project down through a slot in the top-piece of the column and act directly as the top-most comb. The fact that this top-piece was made from wood probably didn't help. (Recently, I accidentally broke the top-most comb off! So much for that glue...)

(Click on the picture at left to see a bigger version.)

The supports for our uprights were cut from a piece of maroon plastic (Bakelite?) originally from an old radio. Odd stuff - when it was cut, there was a strong phenolic smell; and the cut surface was yellow, darkening over time. 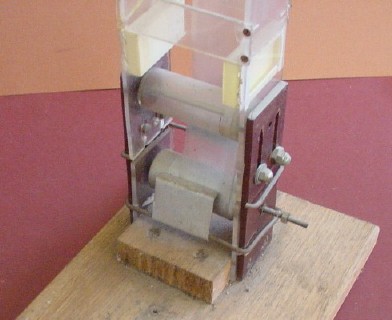 There was a small electric motor on the base (you can see the screw-holes). A driving belt transferred its action to a 2" Meccano pulley (part no. 20a, if you're interested!

) on the drive pulley's axle.

The metal rollers were old-fashioned film canisters. The plastic ones were probably pill bottles.

(Click on the picture at left to see a bigger version.)

Well, what else could go wrong?

The belt didn't like to sit in the middle, and wandered around all over the place. The adjusting slots in the upright supports (just like Bulman's) are an attempt to deal with this problem, but don't do a fantastic job. The little off-white plastic boxes, which originally contained razor-blades, were glued to the uprights as another attempt to deal with this. They didn't really help much; indeed, I suspect that their main effect may have been to discharge the belt!

The uprights themselves weren't brilliant. The perspex we used was too thin, and broke easily. Each of them broke at some point, and was repaired with what looks like an epoxy glue (probably Araldite). We had small cross-pieces also made from the same perspex to add rigidity to the structure, attached with small screws; the uprights were so thin that drilling the screw-holes was a very ticklish business indeed.

Let's face it: the so-called "metallic" glue used in the dome didn't measure up. Apart from the fact that it's not that great as a basic glue (I'm surprised that the dome hasn't fallen apart completely), it wasn't conductive at all.

All in all, a bit of a disaster, really. But, as with so many other old projects, I'm glad I've hung on to it.

At the very least, it's a learning experience - one can see what one probably did wrong and do better next time. Better, I'm sure some of the parts are re-usable. You never know - I may be able to re-shine the dome. (If you've got any sensible suggestions about this, and a kind heart, you may like to drop me a line .)

I suspect that we might have had a better result if we'd used different materials for the top and bottom rollers. Several websites I've seen deal with the "tribo-electric series", which is a way of categorizing materials according to what sort of charge they acquire and how easily they do so. See the various links provided on my Van de Graaff machines sub-sub-menu (the page leading to this one); see below.

Do please revist these pages from time to time. I may build new VDG's, or I may attempt a repair job on this sad old thing - or possibly both. If and when, I'll post the results here.